Lignocellulosic biomass, mainly composed of lignin, cellulose, hemicellulose, is the most abundant raw materials and the largest renewable carbon source on the Earth. Our research group pioneers the solar-driven catalytic conversion of biomass into value added fuels and chemicals. Lignin is the largest non-carbohydrate component in the lignocellulosic biomass. It has been considered as a major recalcitrance factor in biomass utilization such as cellulosic ethanol production and paper & pulping process. Depolymerization of lignin is one of the approaches for lignin utilization. Production of mono-aromatic compounds and/or dicarboxylic acids from lignin can replace the petroleum-based chemical building blocks. For the effective lignin depolymerization, our group is currently developing a visible light-driven chemoselective lignin depolymerization strategy.

Dye-sensitized photoelectrochemical cells (DSPECs) convert energy from the sun directly to fuel. An essential component of a working DSPEC device is a light-harvesting material with relatively long excited state lifetimes, as observed for semiconducting polymer nanoparticles (PNPs). The use of hydrophilic pendant chains and hole-transporting polymers can enhance the stability of the metal chromophore assembly on metal oxide substrates and provide multiple chromophoric antennas that efficiently funnel excited state energy to metal oxide surfaces. To this end, we will pursue a reliable synthetic strategy for the design of a new class of amphiphilic light-absorbing polymer-based metal chromophore-sensitized macro-mesoporous metal oxide electrodes that will form the next generation of multipurpose energy conversion and solar fuel systems. 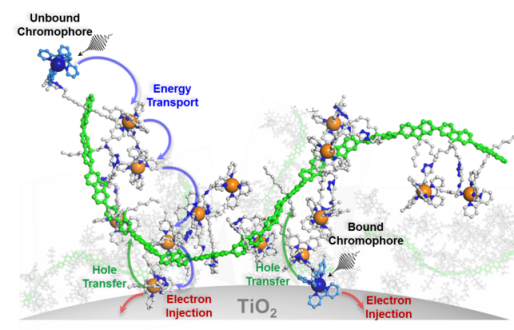 Poly- and perfluoroalkyl substances (PFAS) have been extensively used in industrial products and commercial applications such as nonstick polymers, oxidative metal coating, and fire retardants in the past decades. Especially, the extensive use of perfluorooctanoic acid (PFOA) as a part of the larger PFAS family has resulted in various environmental pollutant persistence and bioaccumulations leading to carcinogenic effect and its toxicity on human bodies and organisms. We envision that PEC is a promising technique for PFOA degradation based on following reasons: 1) photocatalysts are immobilized on conductive substrate, thus additional catalyst separation step is not required; 2) charge separation is enhanced by external electric field, therefore more empty holes can be generated to oxidize PFOA.